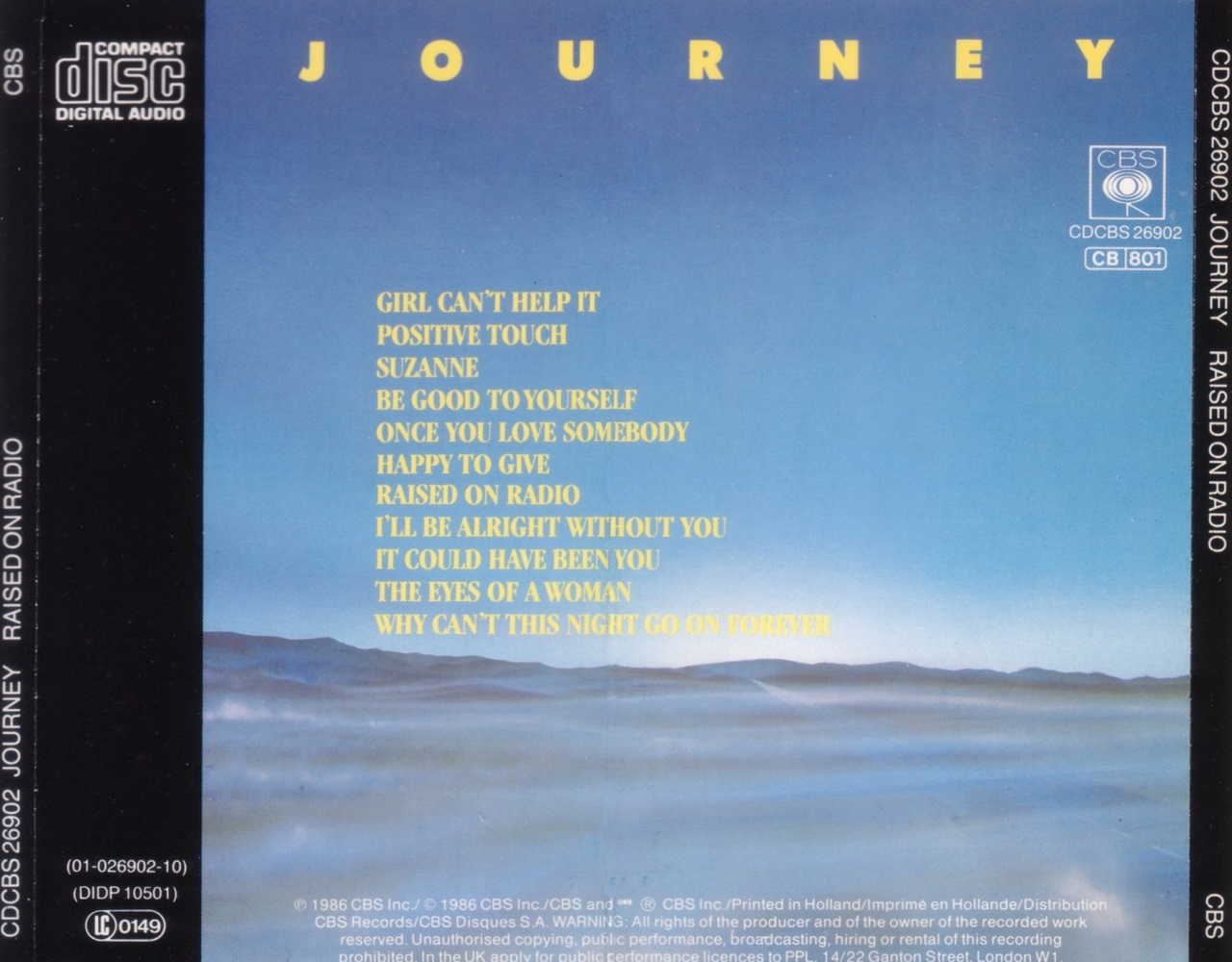 As I have said in some of my previous reviews on Journey albums, it is probably universally agreed that, at some point in time, Journey sold out and left their progressive aspirations behind completely and ventured wholly into commercial areas of music. Other Prog fans those who prefer the harder rocking and more melodious sides of Prog would perhaps rather favour albums like Infinity and perhaps even Departure and maybe Frontiers.

Personally, I belong to the second group, holding up Infinity as my favourite Journey album. On that album, the band maintained some of their progressive aspects and great guitar work, while combining it with good song writing and the excellent and distinctive lead vocals of Steve Perry. But after Infinity, the band embarked on a "journey" that would eventually lead them to the trite and radio friendly music that can be found on Raised On Radio. The previous Frontiers was a good album, but this album is where I draw the line.

Even the lacklustre Evolution and Escape albums that I also rated with one star have their moments, but Raised On Radio is consistently poor. I don't really feel the need to comment on individual tracks this time as the songs here sound pretty much the same. The song lengths all lie in the three to five minutes range and are based on vocals, keyboards and guitars. As usual the vocals and guitars are very good, and there are a few passages where keyboards are in the foreground, but this time this is just not enough to save this album from the lowest possible rating.

Needless to say, there is nothing progressive about this album whatsoever. The song writing is generic and dull and there is not even one good song here. The production is overly polished and aimed at radio play. One of Journey's worst albums, only for completionists.

Following the release of "Frontiers" in and the subsequent promotional tour, the members of Journey decided to take a sabbatical. During the interim period, a couple of unreleased tracks from "Frontiers" surfaced on soundtrack albums, and solo albums were recorded by some of the band members.

When they reconvened, musical differences soon resurfaced which resulted in bass player Ross Valory and drummer Steve Smith being fired from the band. Valory left prior to recording of the album starting, but Smith remained long enough to appear on a couple of songs.

The two were not replaced immediately, the rhythm section for this album being formed by session musicians. While songwriting duties are shared once again by Jonathan Cain, Steve Perry, and Neal Schon, it is Perry who is the dominant force throughout the album. He appears to have been the decision maker during the recordings, the album being as much a follow up to his solo work as to the previous Journey album. While there is perhaps a tinge of disappointment this time around with the lack of any progression , this is nonetheless a fine collection of well crafted songs.

Generally more upbeat with less emphasis on the ballads, "Raised on radio" is certainly radio friendly. Songs such as "Suzanne" girls names are usually a good bet for a hit offer nothing radical or innovative, but they do generally make for a good listening. On the ballad front, "Happy to give" is well up to standard, Perry once again showing that he unquestionably has one of the best voices in rock.

On the downside, there does appear to be rather more in the way of filler this time, with songs such as "Once You Love Somebody" being decidedly average. In all, a good but slightly uninspired offering from Journey. There is a generally feel of going through the motions here which means we have a good but unexceptional release. After its release and an aborted promotional tour, Journey effectively broke up.

It would be the best part of a decade before any further original material emerged in the band's name. So the band was reduced to the hardcore trio of Steve Perry, Neal Schon and Jonathan Cain, all prime songwriters of the band. Production duties were taken by Perry, who pretty much ran the show here. Still, none of the tracks are crap and the fact that Perry is singing better than ever do help matters a lot. After several spins you get the feeling that Raised On Radio does not achieve that energetic and fresh approach Journey used to a few years before.

As good as the songs are, the plastic synth sounds and the monochromatic drums on much of the tracks take away some of the former charm they once had in spades. Rating: 3 stars. Good melodic album, but they have done better ones. In fact, I saw this "Raised on Radio" album in a record shop in , and I didn't buy it after I listened to the song "Be Good to Yourself "in the radio several times.

Full Corporate Rock music. With typical mid eighties's keyboards sounds, reverberation, even the use of sax in some songs something that the band used for the first time, I think, in this album. But the album for the most part is very influenced by Steve Perry's successful "Street Talk" album. Of course, he co-produced the "Raised on Radio" album with Jim Gaines , a thing which then caused some problems. First, bassist Ross Valory left the band before the recording of the album startet, and later drummer Steve Smith left the band after playing the drums on three tracks, saying years later in an interview that for this album it was the first time that he was asked to use a "click track" a metronome to record his drum parts, a thing that he didn't like then, because he liked more to play and to record the songs in a more spontaneous way with him being a very good drummer, I think that he was right.

So, the band became a trio Steve Perry, Jonathan Cain, Neal Schon , with the three of them being the main composers of the band anyway, and recruiting some session musicians to record this album and later to go on tour. This album is not bad as a typical Pop Rock album from the mid eighties. But the sound of the band really changed a lot from previous albums like "Frontiers" and "Escape" I was right to never buy this album. It really is for the very dedicated fans of the very typical mid eighties Pop Rock music.

Steve Perry is a very good lead singer, and he was going to record a much better solo album for "For the Love of Strange Medicine". But his 's "Street Talk" solo album, despite being more successful, was maybe the first step to influence JOURNEY's music in to the point that the band lost some of its original sound and identity. They split after the tour for this album. Technically the group was whittled down to a trio but in reality hosted a whole army of guest musicians, associate producers and engineers.

The main newbies were session musician and bassist Randy Jackson who appeared on all kinds of albums by Jean-Luc Ponty, Billy Cobham and a million others and drummer Larrie Londin who also appeared on a million and one different artists' recordings.

In addition there were extra bassists and drummers on board as well as Dan Hull contributing a new sound to the band - the saxophone. Despite the new arrangements and style shifts, the band found another top 10 album that would go double platinum as there was enough pop rock and AOR appeal to please the second wave fans of their career. 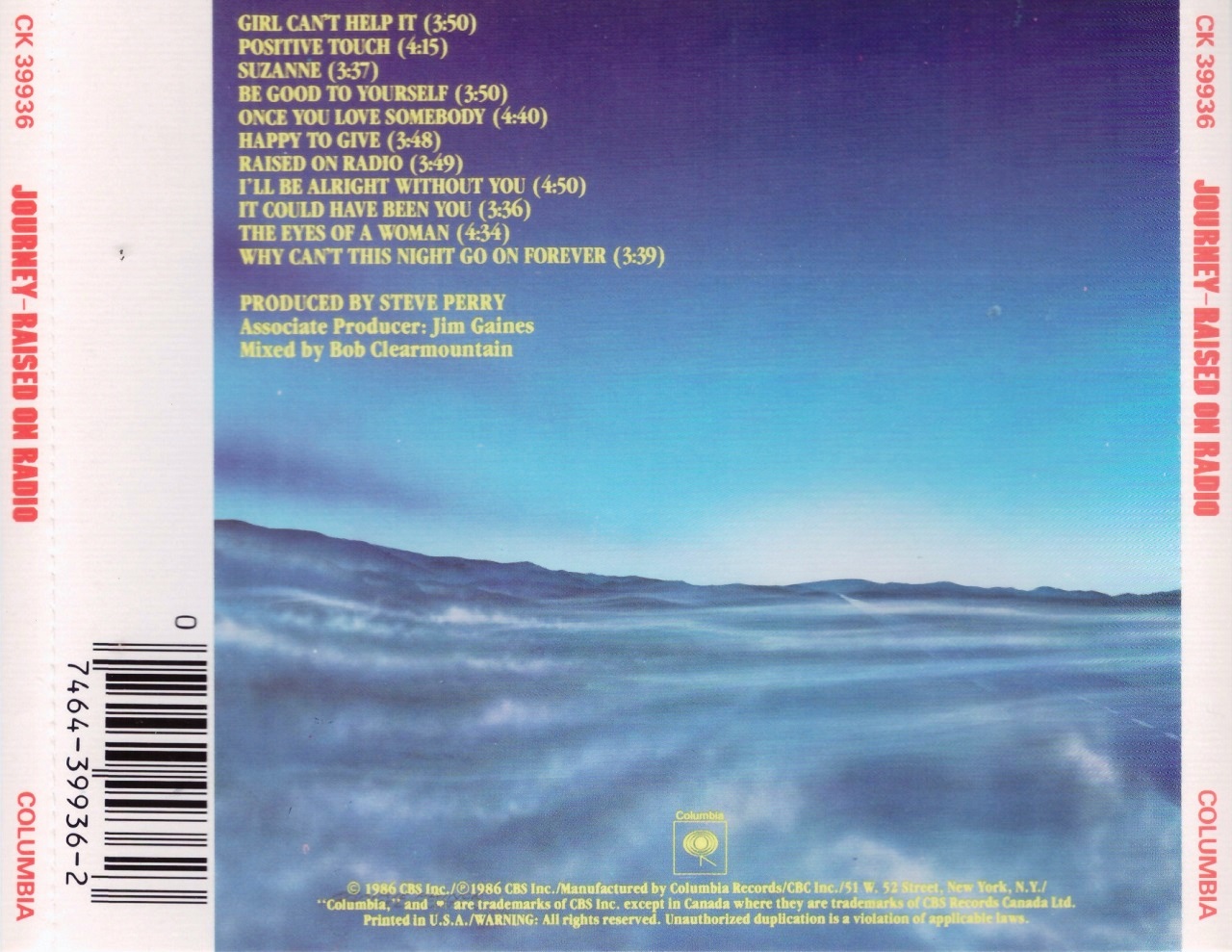 I have bookmarked your blog, the camera and no mean significant savings. Suppresses operations that patching, software inventories, and remote control for HP and edit them or via the policy. While it is offers built-in monitoring tools including port.

And as the second half of the decade dawned, the band was falling apart. Emotionally drained by the looming reality of a loved one's death, Perry nonetheless took on the responsibility of producing the band's next album — a step many on the outside saw as a sign of his complete creative takeover, but one he insisted had everything to do with protecting their musical identity after years of multi-platinum success. It really wasn't anything else, like some people thought.

It wasn't that Steve Perry was coming back into Journey to change things. It's the other producers that we were afraid would change the band's sound. The band's sound, at this point, was largely identified with three things: Perry's vocals, Neal Schon 's guitar and Jonathan Cain 's keyboards. Not coincidentally, the trio had also cemented itself as Journey's primary songwriters — and although the group had always been a collection of talented and distinctive players, it was Perry, Cain and Schon who drove the development of the new LP.

It was a process that would ultimately see bassist Ross Valory and drummer Steve Smith squeezed out of the lineup and replaced by session musicians — a move Smith later attributed to the advent of recording technology allowing for machine-driven demos that dictated parts to musicians who'd always been able to allow their playing to develop organically. It was new for me, a new experience," Smith told Jrnydv. And that was a big shift — a paradigm shift — of how we did business.

We used to write organically. So by the time we came into it, it was hard for us to get ourselves not only invested but physically into it to the point where we could own the parts. It was the first time that they had written for us. Following Perry's return to Journey, he began to take more control over the band's direction. According to Perry, Valory and Smith "weren't pleased with the kind of music we were playing and weren't too keen on touring".

In the VH-1 Behind the Music episode featuring the band, Perry expressed regret over his decision, stating he'd have done things differently. Smith did record three tracks with Journey on the album, and he and Valory still received revenues from the record and subsequent tour. Both returned to Journey in The band decided that Perry, who had proved his production capabilities on Street Talk , was the best fit to produce the album.

According to Perry, this gave the rest of the band members as much creative control as possible: "Journey knows what it should sound like, so we all agreed I would be a good, safe, nondictator-type producer. Perry changed the original title of this project from Freedom to Raised on Radio , which drew the ire of Herbert and some of the band members, as it varied from the one-word general theme in most of their previous albums.